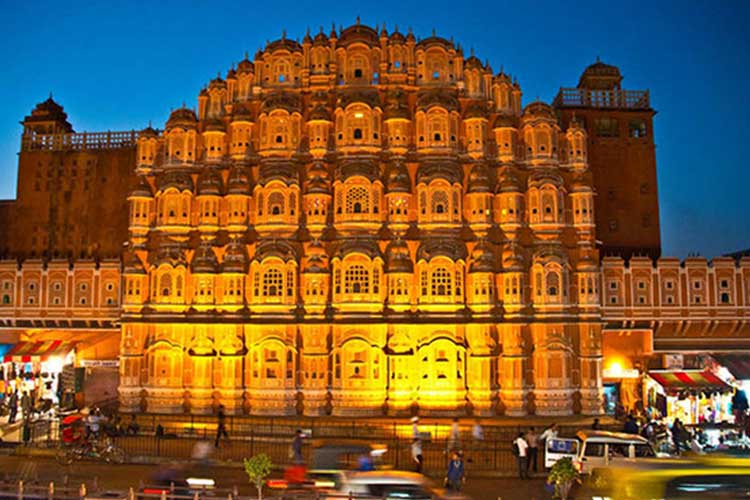 Jaipur, nicknamed as the Pink City is the capital of the Land of Royals Rajasthan. The city has inherited its opulent enamors from the state and has been an ostentatious destination to travel owing to its cultural heritage sites and the plethora of royal embers to rapture over. With the Jaipur Tour Packages, explore the city enriched with spectacular edifices and lip-smacking delicacies for a remarkable experience in the lands ok kings with tour package to Jaipur.

You will be greeted at airport by one of our representatives who will assist you with your hotel transfers. After a short relaxation, proceed for your Jaipur sightseeing tour. Following are the places you are going to visit

Amber Fort: Commission by the Man Singh in the 16th century Amber fort is star citadel of Jaipur perched on the hilltop and is listed amongst the most popular tourist destination of Rajasthan and a must under Jaipur city tour. Built with red sandstone and white sandstone the Fort is one of the finest examples of architectural brilliance. Exhibiting the blend of Rajput and Hindu architectural style and fusion of Indo Islamic ornamentation the fort is one of the finest heritage sites of Rajasthan. The carvings on the ceilings and on the walls are the highlighted feature of the Citadel. Apart from housing the several notable structures like Sukh Mandir, Sheesh Mahal, Diwan-I-Aam and more, the Amber fort also offers the lights of royal elephant safari to the top of the Fort

Jal Mahal: the former hunting lodge the Jal Mahal which is also known as the "Water Palace" is the low-rise symmetrical structure Nestled amidst the Man Sagar lake which also makes it the perfect spot to capture the enchants of Jaipur panorama with lenses.

Hawa Mahal: the five storied structure was commission by Maharaja Sawai Pratap Singh who belongs to kachhwa Dynasty. The red and pink sandstone building is one of the prominent landmarks of Jaipur. The embodiment of the Rajputana architectural skills, the structure is built in the shape of the crown of the Hindu God Lord Krishna. The pyramid-shaped structure has 953 small Windows with their intricate carvings which was primarily built for the ladies of the royal family so that they can catch the insights of the local lives. The structures amongst the most visited Marvels under same day Jaipur tour.

City Palace: Nestled in the heart of Pink City, the City Palace is a beautiful structure commission by Maharaja Sawai Jai Singh, who was the ruler of Amber. It is an impressive assortment of vast array of Courtyard gardens and buildings. Chandra Mahal, Mubarak Mahal, Mukut Mahal, Shri Govind Dev Ji temple has the most notable structures of the City Palace.

Birla Mandir: Perched on the elevated base of the Moti Dungri hill, Birla Mandir is one of the Hindu temples located in the Pink City. The grand temple is also known as Lakshmi Narayan temple. The religious structure is quite famous for its architecture and design throughout the India. The marvel is constructed of three domes which represent the three different religions of India. The walls of the Mandir are adorned with the quotes of Mahabharata and upanishads and engraved with the sculptures that exhibit the different events and themes of Hindu mythological period

Day 1: of Jaipur tour ends here. You will be transferred to your hotel then for the fine dining followed by the overnight stay.

Day 2: Post breakfast, you will be exploring more of Pink City. You will be visiting the following places:

Jaigarh Fort: The fort is nestled on the premonitory called Cheel Ka teela (the hill of Eagles) overlooking the Amber fort and the Maota lake. Commission by Maharaja Jai Singh II, the fort was commemorated as a guarded fortification for the Amber fort and the Palace Complex. Also known as the Victory fort, it is highly influential by the design of the Amber Fort. Manufactured by the fort precincts, Jivan, the Canon was the largest cannon in the world then.

Nahargarh Fort: Overlooking the Pink City of Rajasthan, Nahargarh Fort is Nestle on the edge of the Aravalli Hills and was amongst the strong defense ring of the city. The Marvel was formerly named as Sudarshangarh but later it was changed to Nahargarh which means the “Abode of Tigers”. It was built as the palace of retreat on the summit of the ridge above the City by Maharaja Sawai Jai Singh II. The Fort exhibit the Panorama view of the whole city from the top and is a must visit under Jaipur tour packages.

Kanak Vrindavan : Commissioned in the valley nearby Aravalli Hills Kanak Vrindavan is a garden located  in the Pink City. It was coined by Maharaja Sawai Jai Singh at the time of its Inception. The name of the garden includes the term Vrindavan as the garden resembles of the place where Lord Krishna has performed maharaas near Mathura. The garden Complex has a series of temples, some integrate fountains and adorned marble decorations.

Sisodiya Rani ka Bagh: the palace Garden is Nestle 6 km away from the Pink City. The palaces the beautiful assortment of tiered multi-level gardens with fountains painted pavilions and water courses. It also consists of pavilions paintings and sculpted murals that portrays the different scenes from the life of Lord Krishna.

Jaipur Zoo: Nestled near Albert Hall Museum Jaipur Zoo is another the delight of the Pink City that can be witnessed during Jaipur sightseeing. The zoo is divided into two parts: one section is solely dedicated to the manuals and the other section is for the birds and the reptiles. A museum was also built in the zoo that showcases the wildlife of Rajasthan.

Galtaji Temple: the Prehistoric pilgrimage site, Galtaji, outlined by the Aravalli Hills is a beautiful temple nestled in the outskirts of Jaipur. It consists of beautiful enshrines, natural springs, Holi kinds and pavilions. The temple complex consists of varying shrines and is built using pinks sandstones. The walls of the temple are beautifully carved in decorated. The temple consists of several Kunds amongst which “Gaumukh Kunds” is the most prominent one and is believed to never get dry. The freshwater comes from the “Gaumukh” a rock shaped like cow head.

Royal Gaiter: The funerary complex of Royal gaiter comprises of several stately marble mausoleums hours Jaipur’s ruling family. It has two courtyards, each comprised of imposing Memorials. The former one is dominated by the grandiose cenotaphs of the twentieth-century ruler Madho Singh II and the latter was dedicated to Maharaja Jai Singh II, the founder of the city.
With so many astounding captures and the memories enriched with waves of laughter and narrative legends, you Jaipur tour come to an end.