Evening And Night Tour of Jaipur 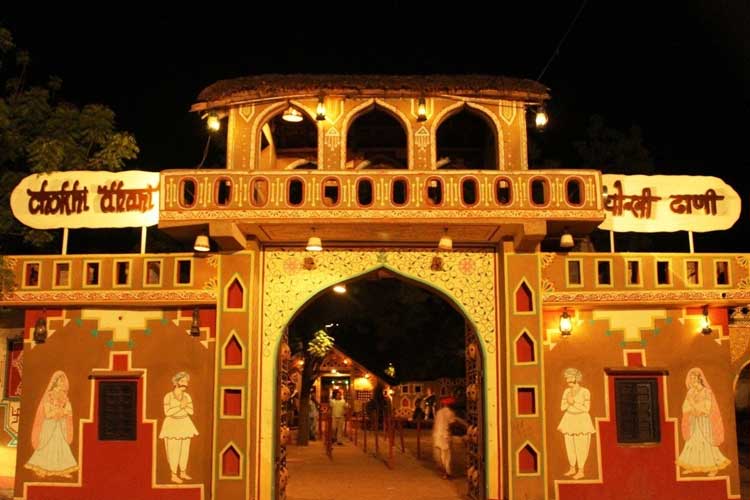 Jaipur, the pink city of India has always been amongst the most traversed destinations of India. From housing the rich heritage of the Rajasthan and embracing its ecstasy, it is also one of the metropolitans of the country, equalizing the maze of historic past with the mélange of modernity.

The evenings of Jaipur city are the most favored time of the day as the hot breeze of the sunny afternoon gradually transforms into the cool breeze of evening, the crystal clear skies ornate with the mild rays of the sun ornate the sky and the red-yellow hues of the sunset embraces the skyline of the city, how beautiful it would be to explore the city and ascend towards its little replica.

The famed resort-restaurant of Chokhi Dhani is one of the most popular attractions of the city. Our evening tour in Jaipur revolves around the excursion to the renowned joint of Jaipur located in its outskirts. Enjoy the traditional welcome along with camel and horse safari and some popular games in the resort. The remote look-alike structure of Chokhi Dhani make it one of the most favored joint to spend the evenings as the red skies turn in the dark glares with the shimmery stars embellishing it to the best and can be best enjoyed under Chokhi Dhani tour from Jaipur.

The night tour of Jaipur includes the excursion to the famed Fort of Amber, the most popular tourist attraction of the Pink City. Perched upon a hilltop, overlooking the lake it houses many notable structures and the expedition to Amber is exhilarated with the night tour of Jaipur. Jaipur Nigh tour packages are illuminated with the folklores and the special effects of light and sound that can be enjoyed well in Light and Sound show in Amber fort. Immerse in the deep historic past of the Amber, its gallant tales and the lifestyles of its rulers with while this light and sound show.

The lands of Jaipur become irresistible under the glare of stars and an excursion to the famed fort during these starry nights will be one of the most remembered experiences of your Jaipur voyage under Jaipur Tour Packages.

Jaipur evening tour or an excursion to its famed rural resort which is quite a major traversed attraction of the city. It showcases the ecstatic hues of culture of Rajasthan and can be summoned up as the mini replica of the one of the largest state of India, Rajasthan.

Your Chokhi Dhani excursion commences in the evening where you will be assisted  by one of our representatives who will escort you while your drive to the famed village resort of the Pink city.

Your Chokhi Dhani evening tour commences with a traditional welcome followed by the welcome drinks which awaits your presence. Later explore the varying attractions within the premises of resort. Enjoy the scenic village and the nearby surroundings with the delighted ride on elephant or horse or camel or even in a buggy. The craft market, the temple and the museum Ajyabghar are some of the other Marvels to halt over within. You can even shop some of the handicrafts from here. It has also some of the fun zones to enrapture over some of the gaming activities like Sanp Sidhi to khel (snakes and ladders game),  luck predictor, jungle said, bhul bhulaiya, and more.

Champs Zeeman Ghar along with Sangri are the popular food zones serving delectable Rajasthani cuisine. Another open roof food zone is the Gorband serving the traditional favorites of Rajasthan.

Enjoy these sumptuous dining along with cultural performances by several artists on folk songs.

Enjoy the evening with the gala dining enriched with traditional flavors and waves of laughter.

Later you will be dropped off at your desired location in Jaipur.