Delhi to Jaipur Tour By Taxi 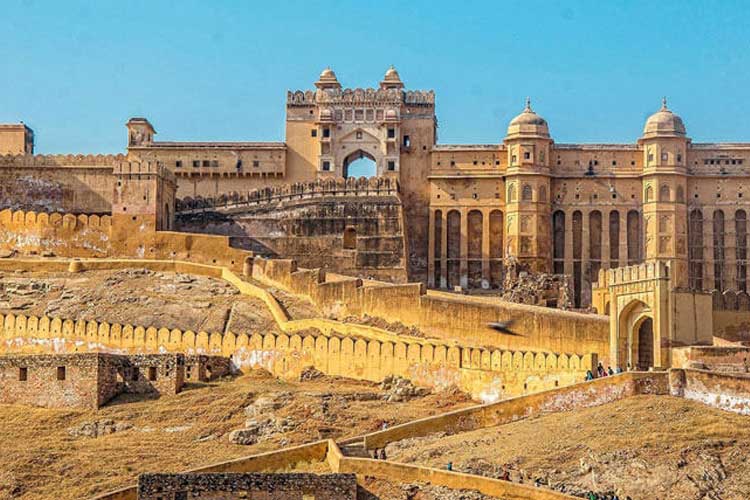 Shri Charbhuja Travels has been working in the taxi business since 2010. We provide Delhi to Jaipur tour by taxi. You will get cabs and cars on rental basis in Jaipur. The travelers can explore the beautiful city of Taj via our comfortable and affordable taxis. We offer three models of taxis that are mentioned below.

These cars are best for 2-5 people, the charges for it is either per Km or per day fixed charges in which we will give you a car for a complete sightseeing tour in Agra, The office of your company is in Delhi, Jaipur and in Agra, we offer cabs from 2013..

To book Delhi Rajasthan tour by car you can come to our office or call us at 80941-23422. You can fill in the contact form below to get any information on car rental service in Agra and taxi from Delhi to Agra tour.

"Places you must visit during Delhi to Jaipur by taxi tour"

HAWA MAHAL-
Hawa Mahal is popularly known as ‘Place of Winds’ built by Maharaja Pratap Singh in the year 1799 A.D. It is one of the popular recalled landmarks of Jaipur as well as known its icon. It is located in the city Palace and best viewed from the outside of the place is really a facade.

The five-story building overlooking the busy bazaar, the street is a stunning example of Rajput architecture and artistry with its pink delicately honeycombed 953 sandstone windows (jharokhas).

This building is built for the royal ladies to watch the everyday life and processions in the city from their veiled comfort.

GAITORE-
This place is the ‘resting place of departed souls’, Jaipur which is located 15 km away from the Jaipur. It is situated on the narrow valley on Jaipur and Ajmer road, the valley has cenotaphs made of marbles and sandstone. It is carved and dedicated to legendary kings who ruled Jaipur.

NAHARGARH FORT-
Nahargarh Fort is located around 6 KM outside the Jaipur city which you should not miss during Delhi to Jaipur tour by taxi. This fort is made along with Amer Fort and Jaigharh Fort formed for the purpose of the defense of the capital. Nahargarh Fort is located along the Aravalli hills overlooking a beautiful lake. An excellent food court and a restaurant are on the top of the fort with an excellent view, Padao. The fort is also the home to Jaipur wax museums and glass palace.

ALBERT HALL-
Albert Hall, built with a mix of marble and sandstone is situated in the beautiful Ram Niwas Garden. It was built in 1876 as a concert hall, got its name from the Victoria and Albert Museum of London. It displays the impressive collection of traditional art like sculpture and miniature paintings.

JAIGARH FORT-
The Fort is perched on the top of the ‘Cheel ka Teela’ hills of Jaipur. At the time of Mughal and Rajput rulers the Jaipur region was a major weapon-producing center. This fort has world’s biggest cannon on wheel named Jaiwara or Jaivana.

It is one of the few military structures of medieval India preserved almost intact, a granary, containing places, temples, tall towers. Thus it is known as the Fort of Victory that you must no miss during Jaipur Sightseeing tour.

JAI MAHAL-
The Jal Mahal is the low rise symmetrical palace, which was built by Sawai Pratap Singh in 1799 A.D. This is 4 km to the north of Jaipur and located on the main Ajmer-Jaipur road. The lake was formed by constructing a dam between two hills by Sawai Man Singh 1. During the winter season, you can see a large number of migratory birds at the lake.

THE CITY PALACE-
This is one of the most famous tourist attractions as well as a major landmark in Jaipur. It is a unique combination of the finest blends of Rajasthani and Mughal architecture. Maharaja Sawai Singh II is known work in this building the outer wall of the city’s complex. In the heart old city, it has a vast area. The outer wall built by Jai Singh and the addition made up to the 20th Century.

JANTAR MANTAR-
Jantar Mantar is an astronomical observing site built in the 18th century by Maharaja Sawai Singh. It contains the complex instruments whose setting and shape is scientifically designed, represents the high points of medieval Indian astronomy. It is the most significant and comprehensive and best preserved of India’s historic observations.

KANAK VRINDAVAN VALLEY-
The Kanak Vrindavan Valley is not so old, but definitely an excellent landscaped garden with the beautifully carved temple. It has a vast complex terrace site all around and intricately carved marble columns and lattices. Kanak Vrindavan is located in the foothills of the Nahargarh hills on the way to Amer this complex is a popular picnic spot as well as for film shoots. You must visit it on the way to the free forts of Jaipur- Nahargarh, Jaigarh and Amber.

The greenery after monsoon gives this place a feel of heaven with JAL MAHAL in the background.

We hope it will be a great Delhi to Jaipur Tour By Taxi for you!